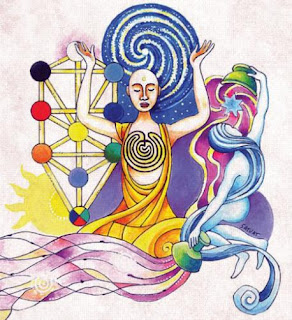 Voarchadumia, ars distincta ab Archimia et Sophia is the title of a work published by Giovanni Agostino Pantheo in 1530 in which the author attempts to create some order amongst various interpretations of the methods and aims of Alchemy. In 1518, Pantheo published Ars transmutationis metallicae and he was perhaps the first to relate the Alchemical Work (Cabalisticum archimicae artis magisterium) to the Kabbalah, by introducing the Hebrew names of the Tetragrammaton and Gematria into his treatises. With the term Voarchadumia he firmly specifies the difference between Alchemy, a term which refers to the ignorant and fraudulent and Archemy (from archè = principle and mia = one, therefore ‘the principle of unity’) namely, the True Art of the Transmutation of Metals and the Elixir of Life.

This treatise on ‘spiritual ‘metallurgy which inspired the greatest Hermeticists and alchemists of the epoch, narrates that Voarchadumia was also a Hermetic and Rosicrucian Society (probably of Portuguese origin though its most important general quarter was to be found in Venice). Custodian not only of esoteric mysteries and scientific knowledge (then heretical) but also practices of an alchemical, magic and tantric nature, it interwove occult relationships between Hermeticists and Scientists. It was often forced to remain hidden, along with the powerful of the time, in order to preserve and develop knowledge because of the obscurantism of the Church and the narrow mindedness of Aristotelian thinkers. Certainly the Jesuits, just as in the case of the Illuminati of Bavaria[1], sought, in every way possible, to obstruct these forms of spiritual search, free experimentation and circulation of knowledge. They even went so far as to produce counterfeit documents and certificates, many of which today, for example, are waved around as proof of the existence of a connection between the Bavarian Illuminati and the ‘Illuminati’ of conspiracy theorists, or those of the New World Order and its mysterious and powerful elite, behind which hide notorious alien hierarchies and ancestral families of hybrid terrestrials.

Without negating the existence of large scale political-economical influence, we need to neatly distance ourselves from conspiracy theories as they are presented today (most of all those with a disputable historical basis, which in turn trigger likewise disputable ‘Evemeristic’ reconstructions[2] of myths and human archetypes). Unfortunately, today the term Illuminati is now mostly used to definitively indicate this true or purportedly true global elite.

The Voarchadumia also seems to be linked with the so called ‘Hungarian Lodge’ (in its turn linked to the ‘Himalayan Lodge’) as well as a mysterious Secret Society operating in the XVI and XVII centuries in Europe, also noted in 1470 as ‘The Fog’ or the ‘Angelic Society’.

Such derivations lead back to more archaic fraternities like that of the (mythical) Naacal, however we must also bear in mind that all initiate societies seek to trace their origins back in time, sometimes alleging outlandish pseudo-historic concatenations to ancient Egypt, Atlantis and so on, rather than to Chaldean priests. Even though their historical attempts may prove to be inadequate, it is important to consider the symbolic and archetypical connections they have with such values at a spiritual level of elective affinities and magic revival.

The myth arising around this Rosicrucian Order with its bizarre name, talks of a document known as the Protocol of the Elders of Caldeirão, of Atlantean origins which is kept in the pyramids of Giza. The writings supposedly hand down the traditions of Agartha, a kingdom inside the Earth’s core governed by a ‘King of the World’, whose access is guarded by ethereal hyperborean guardians in strict alliance with the grand Masters such as: Hermes Trismegistus, John Dee, Nicolas Flamel, Cagliostro, Saint-Germain and therefore M.me Blavatsky etc. Members of the Voarchadumia, included many artists, philosophers, scientists and Renaissance alchemists, the same John Dee (the Order widely used the method of evocation outlined in the ‘Keys of Enoch’), Giordano Bruno, Giorgione, Francesco Colonna and perhaps Galileo.

In the Horusian tradition, the term ‘Spent Forces’ is used to describe the energies closed inside minerals, in the Earth, Air, Water and Fire - even though the latter possesses peculiar characteristics that distinguish it from other ‘spent’ elements. –

If material Form is individuated into basic elements (although this is described in very different terms in Eastern Alchemy), the distinctive parameters for all planes of existence are:

It is clear how, at a certain level, Alchemy fuses with Esoteric Physics and the latter with Magic and therefore mysticism: the distinctions  between such disciplines however, should only be seen as purely conventional and didactically useful.

All the forces that derive from life are ‘Living Forces’, those that originate from living, human, animal and vegetable Form, or of a subtle or divine nature.

‘Living Forces’ contain vital essence, the intrinsic quality of living Form, the emotional element, the function or specific ability, or else the particular state of consciousness expressed in a given moment, represented and supported by a simulacrum (witness) that can also be – but not necessarily – an animal, a plant or its parts.

The fundamental precepts of Alchemy are: To Know - To Dare - To Want -To Be Silent.

The Alchemist investigates and evolves him/herself by means of the world; investigates and evolves the world by means of him/herself. The true aim of Alchemy is in fact to realize the Complete Human Being or to reassemble the Primordial Androgen. The whole of the alchemical process is a ritual and it is necessary to be ‘initiated’: The Esoteric Order is in its turn an alchemical Atanor (crucible) of Living Forces.

The interdisciplinary investigation into the extraordinary relationship between alchemical allegory and the psychology of the inner self can be found in the admirable work of Carl. G. Jung. On this occasion it is important to know that in every pure alchemical element, expediently dealt with and conserved, precise equilibriums and priorities of derivative laws are combined in a fixed and immutable composition.
Knowing the specific dominances, in every element, the alchemist is able to indirectly manipulate the fundamental laws of our world by using alchemical elements, rather than operating directly on the time matrices which is the goal of Magic - although at a higher level – be it alchemical or magic/realizational. This relationship with reality is searched for inside the self, where the functions of the world are recognized as expressions of one’s own working Consciousness.

By Alchemy we are talking about operating on ‘maya’, of finding the correspondences for moving – by means of the essences – the fundamental constituents of the forces of Nature, while with Alchemy and Magick – the term used by Crowley to distinguish this high level of Magic from its lower and more distorted expressions – we explore the reflections of our world/consciousness on the real and vice versa.

When dealing with Alchemy it is necessary to mention an important concept that is often neglected: the Shadow element.

In this world where we forget
We are shadows of who we are,
And the real actions we perform
In the other world, where we live as souls,
Are here wry grins and appearances.

The existence of ‘something’ is always preceded by the idea of its absence, or else by its non-existence. After all, in our daily lives is it not true to say that we only realize the value of something when it is missing?

When a universe is born a counter universe, is also born as compensation (0 = (+1) + (-1)): the shadow universe, or ‘universe B’. It has nothing to do with anti-matter and is a profound and complete antithesis: an immaterial universe.

In fact, from the processes of the cosmic creation, described in the first chapter, the manifestation of the universe of Form not only emanates at various levels and existential planes, but also its ‘shadow’: a counter-universe whose door of  access is represented on the Tree of Life, by the mysterious and controversial sphere of Daath. There we find the point of union (and separation) not between mass and energy, but between the Absolute and the Universe, between Empty and Full, between Creator and Creation, between Reality and Illusion, between Knowledge and the Abyss.

In the same way, when we ‘create’ an element in alchemical operations, we ‘extract’ it from the All and, as compensation, the corresponding counter-element is generated in the shadow universe.

For example, in Hebrew tradition, revived and re-elaborated by modern esoteric schools of thought, the Kabbalistic Tree of Life, with its Sephiroth, represents the universe as luminous and manifest. But another universe also exists, that of the shadowy and destructive Qliphoth: the dark side of that tradition.

The Alchemist has to manage both sides of reality harmoniously and elevate him/herself above duality and appearances.
[1] The Illuminati or to be more precise the Order of the Illuminati, is the name of a secret Bavarian society of the XVIII century. The name has been associated, for the most part wrongly, with numerous secret societies of occult origin. The Order of the Illuminati was founded in Ingolstadt (Germany) in 1776 by Johann Adam Weishaupt (1748-1830). At the beginning its members were just university students, with the declared intent of promoting the works of ‘Lumi’ inside the state of Bavaria, which prohibited many such writings. In reality, the thought of Adam Weishaupt which was much more occult, sustained that “Every man is capable of finding the Inner Light inside of himself... becomes equal to Jesus, that is Man-King...”. The society was formed as an alternative to the newly born German Masonry, maintaining its character of secrecy and hierarchical divisions on the basis of initiation. According to the judicial deposition of Professor Renner during the legal proceedings in Bavaria: “The Order of the Illuminati should be clearly distinguished from that of the Freemasons. But this difference is not recognized by simple Freemasons, neither by new initiates of the Minervale Grade. The Illuminati no longer fear to be recognized by this name”. From the Middle Ages to modern times various organizations have defined themselves as the ‘Illuminati’ for example: the Confraternity of the Free Spirit, the Rosicrucians, the Alumbrados, the Illuminés, the Martinists and the Palladists.
From the 1800’s, especially in the field of conspiracy theories, a widespread socio-pathological phenomenon for a couple of centuries if not more, the term ‘Illuminati’ has been generally associated with followers of secret societies inspired by occult a/o globalist ideas, independent of whether they were in fact really correlated to the Order of the Illuminati: Skull & Bones, Round Table, Pilgrim Society, Fabian Society, Royal Institute of International Affairs, Council on Foreign Relations, Bohemian Club, Bilderberg Group, the Trilateral Commission, the Club of Rome, the Carnegie Foundation, the Rockefeller Foundation etc.
[2] Evemerism was a position on the philosophy of religion held by Evemero, historian and philosopher of the Hellenistic age who sustained that the gods represent deified human subjects.

Posted by Carlo Dorofatti www.carlodorofatti.com at 2:09 AM

In this book - a condensed and up to date report of his research and exploration - Carlo Dorofatti goes deeper into the core content of his studies, using the results to provide a clear and renewed interpretation on topics such as Spiritual Physics, Esoteric Kabbalah, Inner Alchemy, Death and Reincarnation, the Holographic Universe and Time Travel, in light of his spiritual experiences and what he considers "a necessary awareness", a concept that marks the imminent future of humanity.